By cammylee in beef, entrees, sandwiches No Comments 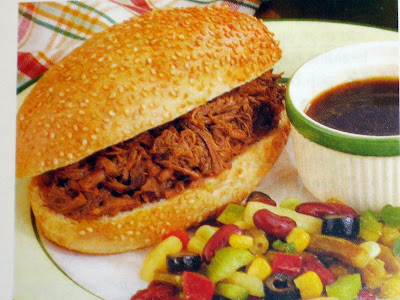 I love this recipe because it almost effortless. I just throw the roast in the crock pot on low the night before and then turn it up to high when I wake up. Quick Tip: the roast needs to be completely covered with water, but too much will dilute the broth used for the sauce. So, cut your roast in half, and then push it down into your crock pot, then cover it with enough water that will give you about 1/4 to 1/2 an inch of water over the roast (add the water after all the soups, broth, and consomme). If you have a smaller crock pot then give yourself an inch of water so it doesn’t dry out overnight. As soon as you wake up, turn your crock pot up to high, and check and make sure that there is still a good amount of fluid in your pot. Then when it is time to eat just pull the roast out and with two forks pull meat apart. This will be really easy because at this point it’s falling apart anyways. I served the sandwich on french rolls because I prefer the texture to a bun with all those sesame seeds, but either will do. The only recommendation I had that was different then the recipes was I change the dipping sauce. Originally the sauce is just the broth from the roast, but it’s a roast sandwich. So the sauce doesn’t give any additional flavor to the sandwich, which is kind of like, what’s the point of dipping it at all then. I still used the broth leftover from the roast, but I added about 1 to 2 tablespoons of barbecue sauce just to give the dipping sauce a little extra flavor and thickness. You can also put mayo on your bread, which it doesn’t ask for in the recipe, but to me it’s not a sandwich without the mayo 🙂 One more recommendation I had was, make sure you season your meat with pepper either when you put it into your crock put or after you are done shredding it. Hope you enjoy!
Ingredients
Directions
Halve roast and place in a 3-qt. slow cooker. Combine the soup, consomme, broth and bouillon; pour over roast. Cover and cook on low for 6-8 hours or until meat is tender.
Remove meat and shred with two forks. Serve on rolls. Skim fat from cooking juices and serve as a dipping sauce.
See Also:  Chicken and Dumplings
« Layered Lemon Pie » Extra-Chocolatey Brownie Cookies